THE SWIMMING POOL by Holly LeCraw 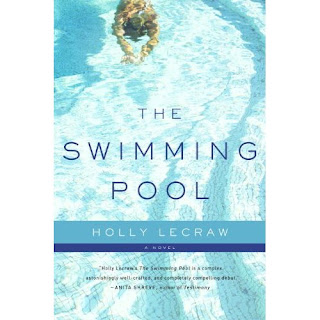 I received an advance copy of this book from the publisher.
There have been many many books over the years that deal with the subject of adultery and one could say that there isn't much left to tell on the subject.  With THE SWIMMING POOL, I was pleasantly surprised to find that indeed there IS more to say.  Seven years before, Marcella Atkinson had an affair with Cecil McClatchey, a fellow vacationer at the group of summer homes on the Cape.  On the night that their affair ended, Cecil's wife is murdered and Cecil dies a scant year later.  Fast forward to the present day.  Old feelings are dredged up when Marchella's teenaged daughter Toni begins working as a nanny for Cecil's grown daughter Callie.  Callie is in the throws of Perinatal Mood Disorder (formerly known as Post-partum Depression) and has escaped to the Cape in a bid for recovery.  Callie's brother Jed is staying with her and finds an old swimsuit belonging to Marcella in their house.  He investigates why the swimsuit is there and becomes involved in an affair with Marcella.
This book is complex and interesting with unexpected twists and turns. It reveals how affairs can have wide-ranging effects on the people involved.  The characters are well-drawn and the story pulls you in.  The reader is caught up not only in the affair between Marcella and her former lover's son but also the mystery surrounding Betsy McClatchey's death and how no one has really been able to move forward since that fateful night. I was also moved by the excellent portrayal of Perinatal Mood Disorder. Having suffered from this disorder myself, I thought LeCraw offered up a very accurate and moving example of this problem in Callie.  That may have been my favorite storyline within the book.
BOTTOM LINE: Highly recommended. A wonderful story of the long-ranging effects of betrayal and family secrets.  Very compelling and hard to put down.
Posted by Amy M. at 3:31 PM
Labels: Book Review

Anonymous said...
This comment has been removed by a blog administrator.
4:00 PM