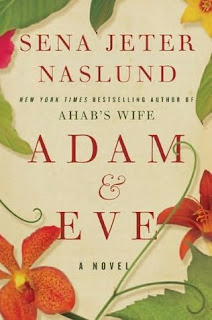 I received an advance copy of this book from the publisher.
In 2017, Lucy Bergmann's astrophysicist husband is murdered just before delivering some ground-breaking work on the existence of extraterrestrial life.  Lucy carries the flash drive holding his research around her neck, reluctant to share it with anyone.
Several years later, Lucy is being stalked by members of a fundamentalist sect called Perpetuity.  The members of this sect come from a variety of belief backgrounds united in the desire to maintain their fundmentalist perspective and to stop anything that would threaten it.  Lucy becomes involved with Pierre Saad, an anthropologist who may have found another set of scrolls that could redefine the Genesis story. Lucy attempts a daring escape with the scrolls out of Egypt only to crash in an Eden-like oasis.  Here, she meets Adam, a damaged American vet who helps to nurse her back to health in their own Garden of Eden.
What a mess!!! This book is all over the place.  At first, I had hoped it would be something akin to Sagan's CONTACT. It wasn't.  The author cannot decide what she wants the book to be.  First, we are looking at science and the possible presence of extraterrestrial life. Then, we skip to the discovery of ancient scrolls that could change the creation story of several religions. Then, we have the sinister bad guys in the form of Perpetuity. Oh, and a love story between Adam and "Eve" in their modern garden of Eden.  But then there are new characters introduced and new relationships in the form of Pierre Saad and his daughter and a journey into a cave with ancient art.  Too much!!!  The characters are weak and confusing and I couldn't understand what the point was. The ending was just bizarre. It made no sense whatsoever.
BOTTOM LINE:  NOT recommended. This may be the worst book I have read this year. Possibly because I expected so much more. Naslund has good ideas but the book is a mess.  She can't decide what she wants it to be and ends up just frustrating the reader.﻿
Posted by Amy M. at 2:40 PM
Labels: Book Review

I know Marie! It really isn't like me to be so harsh. Maybe it's because I was expecting so much. Naslund has good ideas but can't bring them together. She tried to weave too many ideas into one story. And the ending was so silly and blatantly manipulative that it was offensive.