BRAIN: THE MAN WHO WROTE THE BOOK THAT CHANGED THE WORLD by Dermot Davis 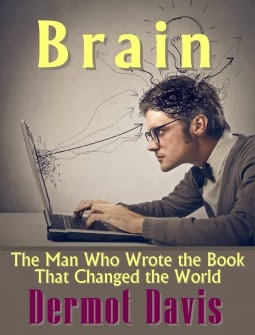 I received a copy of this book from the author.

Daniel takes writing very seriously and dreams of writing the next Great American Novel. His career starts out in a promising fashion but, after a couple of years, his agent tells him that she can't sell his latest novel and it is clear that she is thinking about dropping him altogether.  Daniel is down and out with a car that doesn't run, thousands owed in back rent and no money for groceries.  Out of desperation, he decides to poke fun at the current trend of self-help book success by writing one of his own. But his book will be a clever satirical look at what readers are falling for these days.  Daniel is surprised to find out that instead of the satirical masterpiece he hoped to write, instead he has given the world the next great self-help sensation.

Although I try hard not to judge a book by its cover, I have to say that the cover and title of this book do it a great disservice.  At first glance, this looks like a non-fiction book.  Instead, it is a fun, often snarky look at the publishing world and the readers who are lured in by promises of great life changes if they only buy a certain book. To be honest, it doesn't have very nice things to say about readers in general but, based on the bestseller lists these days, I think Davis is pretty spot-on.

Although I wish the book had been a bit longer and bit more fleshed out, I still enjoyed it.  I feel that Davis could have gone a bit further into his characters.  I only had a real sense about who Daniel was. The other characters weren't as developed. The ending of the book also seemed a bit extreme but I understand the point Davis was trying to make.

BOTTOM LINE: Recommended. This would make a great vacation read.  Very quick and entertaining.  It will have you rethinking your reading habits.

Posted by Amy M. at 8:00 AM No comments:
Labels: Book Review

RULES FOR BECOMING A LEGEND by Timothy S. Lane 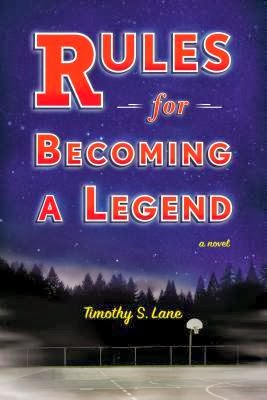 When I see a book with sports featuring highly in the story, my initial inclination is to avoid it. That all changed with Chad Harbach's ART OF FIELDING. Harbach's novel proved to so much more than a novel about baseball. So, I was interested to see how Lane would use basketball in his new novel.

Jimmy Kirkus is a basketball star who just happens to be the son of a basketball star.  His father, Todd Kirkus was once known as "Freight Train" Kirkus and was destined for greatness in the NBA until blowing out his knee.  Now, Jimmy holds the weight of the family's hope and dreams for basketball greatness on his thin shoulders. It proves to be too much. The novel opens with Jimmy repeatedly running into a wall in his school's gym in an attempt to knock himself out or worse. In a nod to the fact that Jimmy is half-Japanese, he becomes known as "Kamikaze" Kirkus.  The novel is told in a before-and-after style where everything dates from and to the incident with the wall.  We see the Kirkus Curse slowly revealed through flashbacks and get an understanding of just what went wrong with this family. Basketball becomes a method for understanding this family's story as well as how they fit into the greater community where basketball is king.  Primarily, it is a tale of fathers and sons and how the sins of the past can sometimes be visited on the one's children.  Can Jimmy break the curse and make a future for himself and his family?

Although I do not believe that this book is as literary or well-written as ART OF FIELDING, it is still a great read. The characters are compelling and well-fleshed out.  I really liked how Lane told the story around the incident of Jimmy and the Wall. It wasn't hard to follow at all and it showed how that particular incident was the centerpiece of everything that happened.

BOTTOM LINE:  Recommended. A great read for those who love stories about complex family relationships.  I can see this one being made into a movie. 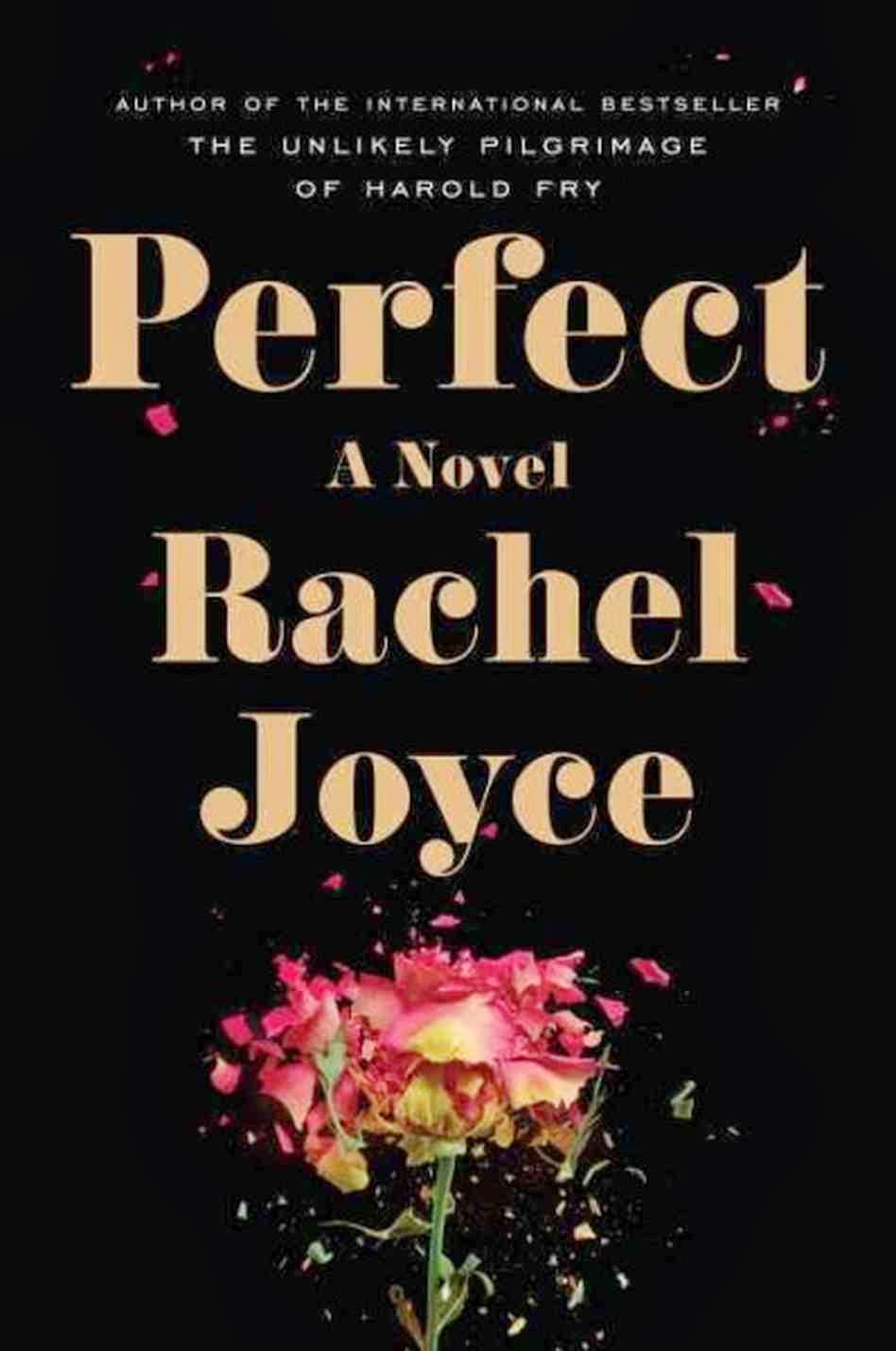 I adored Rachel Joyce's previous novel, THE UNLIKELY PILGRIMAGE OF HAROLD FRY, so I jumped at the chance to read her latest book.  Joyce has a real gift in creating interesting and unusual characters.  She populates her books with individuals who aren't your average heroes but are heroes nonetheless.

PERFECT takes place in England in 1972.  Byron Hemmings and his friend James Lowe are 11 years old and are on the cusp of manhood. They are dealing with the pressures of preparing for their entrance examinations for college.  Byron and his sister Lucie live in a lovely Georgian home with their mother Diana who strives to be the perfect wife while her husband is away during the week in London.  Throughout the book, the reader begins to see just what a struggle it is for Diana to maintain that illusion of perfection.  One day, when they are running late for school, Diana and the children drive through an unsavory part of town in an attempt at a shortcut.  In the fog, the car spins out of control.  Diana rights it and they make it to school but Byron realizes she doesn't seem to know that she hit a little girl on a bicycle in the process. This begins a chain of events that will change the lives of all of the characters forever.

There are a lot of things going on in this story.  We encounter mental illness, class warfare, a coming-of-age tale, emotional abuse, blackmail, and much more.  There is so much here that Joyce some of the threads in the story have to be dropped in order to continue the narrative.  The characters are amazing and interesting, however. Joyce does a wonderful job creating flawed and complex characters.  The story moves back and forth between the Summer of 1972 and the present where we see where one of the boy ended up.  The plot twist at the end of the book doesn't prove especially effective because there are enough clues early on that a careful reader can figure out what is going to happen. However, that doesn't hinder the final outcome of the book.

BOTTOM LINE: Recommended. This is a heartbreaking coming-of-age story that also manages to be beautiful.  While the book is as flawed as its characters, it still manages to tell a compelling story that will leave you thinking about the characters and longing for answers for a long time to come.
Posted by Amy M. at 8:11 AM No comments:
Labels: Book Review

WHILE BEAUTY SLEPT by Elizabeth Blackwell 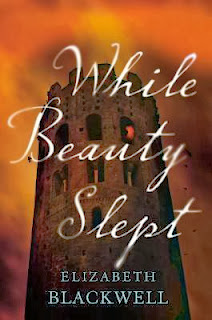 I think it is always intriguing when authors take well-known stories and either reimagine them or flesh them out a bit more. In WHILE BEAUTY SLEPT, Blackwell offers us the "real" story behind Sleeping Beauty.

Elise Dalriss overhears her granddaughter telling the story of a beautiful princess in a tower awakened by a handsome prince.  The granddaughter tells her grandmother that she heard the tale from a minstrel.  The story brings Elise back to her youth spent as a servant at the castle. Elise tells the story of how she rose from a poor peasant to a lady-in-waiting at the court of King Rannolf and how she stood witness the true story behind the princess in the castle.

Overall, I think Blackwell's retelling of Sleeping Beauty was very clever and interesting.  I think fans of Geraldine Brooks' YEAR OF WONDERS will find much to like here.  Elise is a compelling character and storyteller.  I didn't want to put the book down because I had to know what happened.  I think I read the whole thing in two days. When the reader gets to the part of the book that deals with the famous story, it is at the very end and felt a little bit disappointing after all the buildup. Indeed, that is my one major complaint about the book. Almost every chapter ended up with heavy foreshadowing or a statement to the effect of "little did I know then" or "the worst was yet to come."  After awhile, it got a bit tiresome. That did not stop me from enjoying the book. I like the way it reminds us of how stories can change as they are passed on and how myths and legends develop.

BOTTOM LINE:  Recommended. This would be a great vacation or beach read. It goes at a quick pace and is very entertaining. The ending is a bit of a letdown but it doesn't detract from the book overall.

Posted by Amy M. at 12:57 PM No comments:
Labels: Book Review
Newer Posts Older Posts Home
Subscribe to: Posts (Atom)
Welcome to Life by Candlelight. This is the home of the "BOTTOM LINE" book review! I've been blogging since 2003 and have worked in public and privates libraries since 2000. Find tidbits about my life, book reviews and other things currently whirling around in my brain. Unless otherwise stated, all books are either library or personal copies. I specialize in contemporary literary fiction with the occasional children's book review.