Why I'm Voting for Obama

I thought I'd be very specific about why I am choosing Obama for President. We have to decide something so important on much more than the basis of political party or a single issue.

1. He supports an increase after-school programs for lower-income families and affordable child-care options. Anyone with a child in college would get a sizable tax credit. (The only McCain changes would be a possible credit that families could use to pay for private schools.)

2. He supports an expansion of family leave benefits especially for employees of small companies. (McCain sees no need to change current requirements for maternity leave or family leave)

3. In his health care plan, participants could change job while keeping their insurance plan. Insurance companies could no longer deny coverage to individuals who have pre-existing conditions. This would directly affect my mother. ALL children would have health care coverage. (McCain's plan covers none of these things. However, there MAY be slighter lower prices for insurance in his plan. McCain would also tax everyone's health care benefits which would only be offset by a $5000 credit. My plan is worth $1500 a month. $5000 wouldn't get me very far.)

4. Under Obama's plan, 95% of American would get a tax cut. However, if you earn OVER $250,000, there would be a tax increase. (Under McCain's plan, the more money you make, the LARGER your tax cut would be. We have already seen under Bush how "effective" tax cuts for the rich have been.)

5. The next President will be choosing several new Supreme Court justices. We can't afford to lose legislation such as Roe v. Wade because it would be giving license to the government to tell ALL of us what we can or cannot do with our bodies.

6. I have people that I care about in the military and I'm ready for them to come home. We need a CLEAR definition of what success in Iraq looks like and a plan/timeline to get our troops home so that we stop bleeding money and losing lives.

We have the opportunity in this election to effect some real positive change. I respect Senator McCain. He has served his country well and I admire his efforts at campagin finance reform. However, in spite of calling himself a Maverick, Senator McCain has voted with President Bush 90% of the time. Even Republicans can now see that the current Presidency has set us back. Do we really want to continue that? Also, what if something happens to McCain? Gov. Palin is not ready to lead. She doesn't even know what the Vice President does and can't name any Supreme Court decisions other than Roe v. Wade. That is really scary. If we are going to accomplish some good things over the next four years, it will take ALL of us. Not just liberals and not just conservatives. Any real change has to come from both sides. I hope we can do it. I believe we can.
Posted by Amy M. at 9:23 AM 3 comments:
Labels: politics

INTO THE FOREST by Jean Hegland

A friend of mine at work lent this book to me and it proved to be a very quick read. INTO THE FOREST explores the lives of two sisters (ages 18 and 17) who are left to fend for themselves in a semi-apolcalpytic world. They live in a house on the edge of a forest thirty miles from the edge of town and manage to survive by growing their own food and making use of the "junk" their father accumulated while alive. In the midst of their efforts, tragedy strikes and the girls must decide whether to take their chances on the road or to remain on the edge of the forest.

This was a good quick read although it often felt as if the story was developed too quickly and was often simplistic. I feel that the author could have done a lot more. However, the book really makes you think about what you would do in a similar situation. It made me want to run out and read ANIMAL VEGETABLE MIRACLE again so I could learn to be self-sustaining. This would be a great companion book for McCarthy's THE ROAD. You could make it a weekend of apocalyptic reading.
Posted by Amy M. at 1:42 PM 1 comment:
Labels: Book Review

GIRL WITH THE DRAGON TATTOO by Stieg Larsson 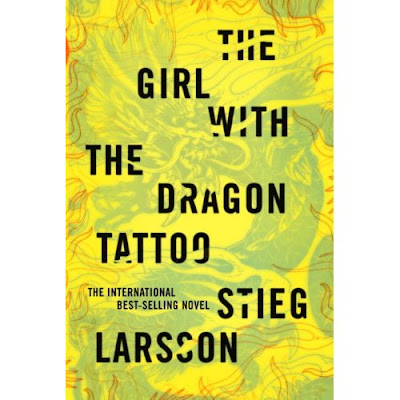 I hadn't read a mystery/thriller in awhile when I came across this posthumous book by Swedish author Stieg Larsson. This international bestseller was very engrossing. The first fifty pages or so got a little bogged down in a description of a libel case. I almost gave up. Once the mystery got introduced, however, I was hooked. I must warn you..this book is not for the faint of heart. There is a great deal of violence towards women and gruesome depictions of sadism. I couldn't put it down, though. After the resolution of the mystery, the story gets bogged down once again in the libel case. I can't understand the reasoning behind such a clunky plot device. I still enjoyed the book, however, and look forward to the release of the next book in the trilogy.
Posted by Amy M. at 4:46 PM 2 comments:
Labels: Book Review

The cover of October 21's W MAGAZINE has been leaked and it shows Angelina Jolie breastfeeding one of her new babies. And you know what? It's really beautiful. I don't care what people think...that woman looks radiant!!!!

I never read HOUSE OF SAND AND FOG but I thought the movie was really compelling. I was interested to see what Dubus' latest offering would be like. GARDEN OF LAST DAYS follows the lives of several individuals surrounding a strip club in Florida in the days leading up to 9/11. To me, the novel felt as if it could have been a Paul Thomas Anderson film. I was reminded of the feel of "Magnolia" several times. The characters in the novel are all loosely connected and yet they impact one another in interesting ways. I especially found the character of the terrorist especially interesting. Overall, I liked the novel although I felt Dubus could have done more. I felt the story unfolded a little slowly at times. However, I like that it covers a period of time during the 9/11 tragedy that is seldom addressed.
Posted by Amy M. at 12:04 PM 1 comment:
Labels: Book Review

Here's a meme from my friend Vieve:

That would have been the fall of 1998. I was in the middle of graduate school for my master's degree in anthropology. I was dating a guy in the air force who was eight years older and ended up being one of the worst mistakes of my life.

I am a cookie monster so if there is a chocolate chip cookie available I definitely go for that! Most of the time, i have a granola bar.

4. Where are some places I've lived?

5. What things would I do if I were a billionaire?

Pay off my debt and student loans. Buy a house. Donate to all my favorite charities. Buy my mom a house. Create a college fund for Aidan. I want a home of my own so badly. If I could win a lottery for just a couple hundred thousand I would be a happy happy woman. Real estate is so ridiculous in California that I doubt we will EVER be able to afford a house.
Posted by Amy M. at 10:49 AM No comments:

I recently found a new blog that I have been reading called "Mom 101" and I really enjoy it. This post especially got to me. It is definitely hard to be a working mom. I went to a Mommy Track'd conference in San Francisco last week and really enjoyed it. It had a roomful of 500 working moms. It was nice to be around women who are in the same boat. However, a lot of them can afford nannies and au pairs. To me, it doesn't matter what kind of sitter you have. That isn't the point. No sitter or nanny or au pair can take the place of a real-live-honest-to-goodness mommy. Sigh....
Posted by Amy M. at 9:47 AM 2 comments:
Newer Posts Older Posts Home
Subscribe to: Posts (Atom)
Welcome to Life by Candlelight. This is the home of the "BOTTOM LINE" book review! I've been blogging since 2003 and have worked in public and privates libraries since 2000. Find tidbits about my life, book reviews and other things currently whirling around in my brain. Unless otherwise stated, all books are either library or personal copies. I specialize in contemporary literary fiction with the occasional children's book review.