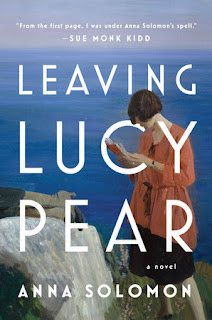 (I received an advance copy of this book from the publisher)

Faced with the prospect of having her newborn daughter taken from her and put into a home, unwed Beatrice Haven sneaks out of her aunt and uncle's house on night and leaves her baby under a pear tree in the hope that the people who steal the pears every year will find her. She stays hidden until she sees another woman carry her daughter away and then leaves to attempt to move forward from her shameful secret. Beatrice comes from a wealthy Jewish family and hopes to move on and become a pianist. Ten years later, Beatrice returns to her ailing uncle's Cape Ann home to take care of him. A local Irish woman named Emma Murphy comes to help care for Beatrice's uncle. Emma is the woman who rescued the infant below the pear tree ten years before.

Set in the 1920s, Solomon captures a moment in time when women were on the verge of getting the vote and becoming more independent but still faced the shame of extramarital sex and unwed pregnancy. The story focuses on Beatrice and Emma and Lucy Pear, the daughter Beatrice left behind. Solomon does a wonderful job portraying Beatrice's conflict about the abandonment of her child and that conflict led to mental illness. I also appreciated the complex feelings that Emma goes through when coming to terms with meeting the mother of her adopted daughter. Lucy Pear herself is a fascinating character who is wise beyond her years. Solomon does a great job showing how families come in different shapes and sizes and the dangers of not being true to oneself.

BOTTOM LINE: Recommended. I really enjoyed this one. I thought the characters were interesting and I loved the inclusion of lots of different issues during the 1920s including racism, birth control, union issues, politics, and the social ramifications of a young woman giving birth outside of marriage at that time. A very interesting read!
Posted by Amy M. at 10:06 AM No comments:
Labels: Book Review, Viking/Penguin
Newer Posts Older Posts Home
Subscribe to: Posts (Atom)
Welcome to Life by Candlelight. This is the home of the "BOTTOM LINE" book review! I've been blogging since 2003 and have worked in public and privates libraries since 2000. Find tidbits about my life, book reviews and other things currently whirling around in my brain. Unless otherwise stated, all books are either library or personal copies. I specialize in contemporary literary fiction with the occasional children's book review.