A long time ago, I attended college at Trinity University in San Antonio. I entered college with some pretty negative opinions about the Greek system. My only examples of Greeks growing up were the cookie cutter girls from SMU.  Trinity has a local Greek system and does not do pledging until the Spring. The fall of my freshman year, I noticed some sophomore girls in my anthropology class who just seemed unbearably cool. They were confident and intelligent and interesting. You could have knocked me over with a feather when, on Jersey Day, every single one of those women showed up wearing a red Greek jersey.  I couldn't wrap my mind around it. How could women this cool belong to a sorority? Maybe I needed to rethink this whole Greek thing.  And maybe I needed to find out which sorority wore red jerseys.

I did my due diligence and, to my amazement, Zeta Chi welcomed me into their ranks in the Spring of 1994.

I met a lot of amazing women in my time with Zeta Chi but, over the years, I lost touch with almost all of them. This is one of the reasons why I am so thankful for Facebook. Because of Facebook, I managed to reconnect with many of the women of Zeta Chi.  Some of them I even got to know better through Facebook than I ever did in college.  One of these women is Lydia.  Lydia is also an avid reader and she and I definitely share the same taste in books. I am humbled by the fact that Lydia has been enjoying this little blog and has gotten some good book recommendations from it.  As hard as I try, however, I can't always hit the many terrific books that come out each year on my blog.

Lydia is going to be a guest poster on my blog doing a new feature called "Not New But Notable."  She'll be checking in with some titles that I may have missed so we can cover more ground with reviews here on Life by Candlelight. She already has some great ideas for reviews and I can't wait to share them with you!

Stay tuned for Now New But Notable with Lydia!

I have a milestone birthday coming up. This May, I turn 40 years old.  Wow.  How did THAT happen?!

For several years now, I have been wanting to put up a Little Free Library in my front yard. I live in a neighborhood with an interesting mix of people.  We get lots of foot traffic going by our house. I love the idea that people could stop by and get a free book right in front of my house.  The next best thing to my dream of owning a brick-and-mortar bookstore!

My problem has been that these Little Free Libraries are usually $300-$350.  If only I had the woodworking skills and tools to make my own!  I am not going to give up though.  What better gift to my neighborhood than the gift of free books?  This is why I think print books are not going to go away.  A print book requires no technology beyond itself. And it can be shared again and again.

THE FIFTH GOSPEL by Ian Caldwell 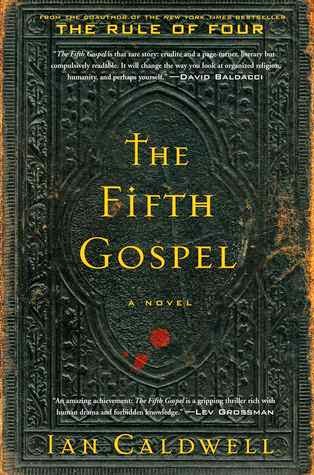 ( I received an advance copy of this book from the publisher.)

Ian Caldwell has not written in a book in ten years since he co-authored THE RULE OF FOUR with Dustin Thomason.  It is clear that a lot of thought and research went into this new book. The book will draw inevitable comparisons to DA VINCI CODE but I would caution readers about looking for a new Dan Brown story within Caldwell's work.  On the literary spectrum, I would say Caldwell falls closer on the scale to Umberto Eco than Dan Brown. While Dan Brown is a good storyteller, he isn't much of a writer.

THE FIFTH GOSPEL takes place in 2004 as the end of Pope John Paul II's reign.  Father Alex Andreou is a Greek (Eastern) Catholic priest who lives inside the Vatican walls with his young son.  Father Alex teaches the gospels to young men hoping to someday become priests.  Father Alex's brother is Father Simon Andreou who is a Catholic priest holding a prestigious position high in the Secretariat. The two brothers have grown up with close ties to the Catholic church with a father who was a Greek Catholic priest and an uncle who holds a position high within the Church. The brothers embody the split between Western Catholics and Eastern Orthodox that came from a great schism within the church hundreds of years ago. Both of them are closely involved with a mysterious exhibit that is about to take place in the Vatican Museums.  The curator, Ugolino Nogara, claims to have made an important discovery regarding the Shroud of Turin. Before Nogara can open his exhibit, he is found in Castel Gandolfo dead from a gunshot wound.  Simon is fingered as the killer and Alex must figure out who is framing his brother and why.  As he attempts to discover what other secrets the exhibit may have been carrying, Alex must figure out who to trust and how to protect his family.

This is a very difficult book to summarize. There is A LOT going on here.  There is a murder mystery and a secret exhibit with a possible coverup within the Church. We see Pope John Paul's final days as the leader of the Catholic Church and his attempt at building a legacy.  There are two brothers and the intricacies of the relationship as well as the legacy of their family.  There is Alex who struggles not only with his complex feelings surrounding his brother but also with his life as a solo parent in the aftermath of his wife walking out five years before.  There is the difficult relationship between the Eastern Orthodox and Western Catholics and all the history that surrounds that relationship.  Whew! It is hard to keep track of everything!

Caldwell is a careful writer who takes him his time in allowing his story to unfold. He offers a lot of detail about the history of the Church and the Shroud.   While DA VINCI CODE was a fast-paced thriller where every single chapter ended on a cliffhanger, THE FIFTH GOSPEL does not need to resort to that kind of plot device.  Caldwell allows his story to unfold slowly and methodically. He takes his time with his characters so that we know and understand them all very well.  We get a lot of back story not only of the characters but of the Church as well. While the story of the exhibit and Shroud take center stage, the relationship between the two brothers and their family is just as important.

There was so much going on in the book that I sometimes found it difficult to follow what was happening. There were a lot of characters to keep track of!  Still, I really enjoyed the book. It was thought-provoking and interesting.  The best part for me was the story of this unique family and their complicated bonds. I found it even more compelling than the mystery of the exhibit and Nogara's death. Fans of the DA VINCI CODE may be disappointed if they come here looking for more of the same. This isn't a fast-paced conspiracy-driven thriller.  It is much more thoughtful. Instead, I would recommend this book to individuals fascinated with religion and Catholic Church history.  Reading this book definitely made me want to go and do my own research about Church history and the Shroud of Turin.

BOTTOM LINE: Recommended.  Ignore all comparison to the DA VINCI CODE. This book stands on its own as a well-researched and well-written story of the history of the Catholic and Orthodox churches and the Shroud of Turin.

Posted by Amy M. at 10:17 AM No comments:
Labels: Book Review
Newer Posts Older Posts Home
Subscribe to: Posts (Atom)
Welcome to Life by Candlelight. This is the home of the "BOTTOM LINE" book review! I've been blogging since 2003 and have worked in public and privates libraries since 2000. Find tidbits about my life, book reviews and other things currently whirling around in my brain. Unless otherwise stated, all books are either library or personal copies. I specialize in contemporary literary fiction with the occasional children's book review.