YOUR ALIEN by Tammi Sauer and GIVEAWAY!!! 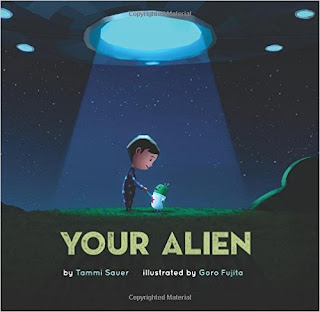 I am so excited about this one!  YOUR ALIEN is an absolutely charming children's book from Tammi Sauer and Goro Fujita.  A little boy looks out his window one day to see an alien spaceship crash landing. He and the cute little alien become good friends and have a lot of fun together. That night, however, the alien gets sad and the boy has to figure out how to comfort his new friend.

Not only is this book incredibly sweet but the illustrations are so charming!  The rhythm and style of the text are reminiscent of Numeroff's IF YOU GIVE A MOUSE A COOKIE books. My 7-year-old son read the book out loud to me. There were only a few tough words and he was able to use picture clues to figure them out.  He laughed out loud several times during the story and told me this was his favorite part: 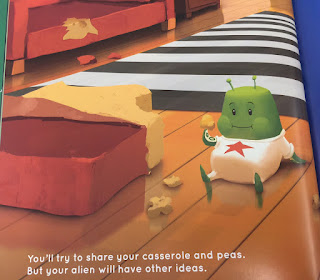 I loved that this picture book was both funny and sweet.  It has lovely things to say about friends, family, and helping others. I think kids of all ages will like this one but especially Preschool through 2nd Grade.  Even if your child is already a good reader, the story and illustrations will draw him/her in.

Want to win a copy of this wonderful book?
Leave a comment telling me your favorite alien in books, television or film.
Open to US residents only.  Contest closes August 7, 2015 at 8:00am PST.

SUSIE IS THE WINNER! Thanks for playing!  I will have more giveaways soon!
Posted by Amy M. at 8:00 AM 3 comments:
Labels: Book Review, children, Sterling 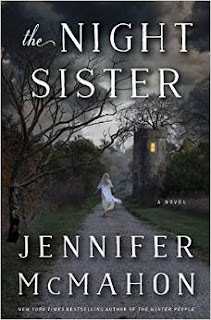 (I received an advance copy of this book from the publisher.)

Jennifer McMahon writes really creepy books. And this one is no exception. Some of you may remember my review of her book THE WINTER PEOPLE.  McMahon returns to the supernatural suspense genre with her latest book entitled THE NIGHT SISTER.  As in THE WINTER PEOPLE, McMahon moves back and forth through time to set up her story.  In 1955, sisters Rose and Sylvie are growing up at the 28 room motel that their parents run in a small town off Route 6 in London, Vermont.  The Tower Motel is known for its tower feature that the girls' father built for his English wife. Sylvie is the golden child and Rose is struggling to grow up in her shadow. Sylvie has big plans to run off and be a famous Hollywood actress. She idolizes Alfred Hitchcock and writes him letters about her life in London.  One day, Sylvie disappears and leaves a letter behind about her desire to leave and start a new life.  In 1989, Rose's daughter Amy is living at the crumbling motel with her English grandmother.  Her best friends are sisters Piper and Margot.  As the girls run wild around the motel, they discover a dark secret.  In 2013, Piper receives a call from Margot saying Amy and all of her family are dead supposedly killed by Amy's own hand. Amy leaves a cryptic note behind that says "29 Rooms."  Piper and Margot immediately know what it means.

THE NIGHT SISTER is a really creepy book.  I couldn't put it down. I had to know what was going to happen. There are supernatural elements to this book so do not read it expecting a traditional suspense/mystery. I think McMahon does a great job in developing characters.  Although there are quite a few heavy hints that point to what is going to happen, it is still an enjoyable read.  I was a little disappointed by the ending. It felt a little too far-fetched. Even for a supernatural thriller. But, overall, I thought it was a fun read.  Perfect for a rainy night.

Posted by Amy M. at 9:50 AM No comments:
Labels: Book Review, Doubleday

YOU TOO CAN HAVE A BODY LIKE MINE by Alexandra Kleeman 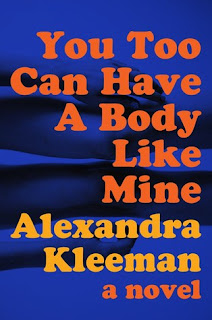 (I received an advance copy from the publisher)


This novel was perplexing.  I had a hard time trying to figure out what it is about.  A woman named A lives with a female roommate named B.  A dates a man referred to as C. A's life is defined by the consumer world around her. Her time with C is spent watching either television or porn. A finds herself mesmerized by a news story about a man who became a celebrity by buying all the veal he could get his hands on. She constantly refers to animated commercials for an artificial food product called Kandy Kakes and spends her time outside of her apartment at either her boyfriend's, her job, or the nearby Wally's supermarket. A's relationship with B has a "Single White Female" quality to it. B's behavior seems bizarre and she appears to be trying to make herself look more like A. C has all the control is his relationship with A and is the only one allowed to define their interactions. One day, A looks out the window to discover her neighbors leaving their home covered in white sheets. She begins to learn about the cult they have joined and decides that this group may have the answers to her questions about identity and self.

I think there are some truly inspired moments in this book. Kleeman is so gifted at description. I could instantly visualize the Kandy Kake commercials and setting that she described in such detail. I had a very clear idea of setting and character. However, I was completely confused most of the time about everything else. I feel like Kleeman has important things to say about identity and self in our consumer culture but I had a hard time following the thread. I was confused in a way I haven't been since reading A VISIT FROM THE GOON SQUAD.  Because of this, I just didn't enjoy the book. It was very difficult to get through and I didn't find the ending particulary satisfying or enlightening.

BOTTOM LINE: Not recommended.  Although Kleeman is clearly a gifted writer, I just couldn't follow the story. I found the whole thing very confusing.  This very well may be my fault as a reader. I would definitely read future works by Kleeman but this one was a miss for me.

Posted by Amy M. at 9:54 AM No comments:
Labels: Book Review, Harper

“Are You My Mother?” meets “I Want My Hat Back” in the hilarious new picture book, Max the Brave (Sept. 8), by author and illustrator Ed Vere. Follow fearless Max as he encounters every other creature except the one he’s searching for…mouse. Check out the trailer!

Posted by Amy M. at 3:31 PM No comments:
Labels: children

ORION AND THE DARK by Emma Yarlett 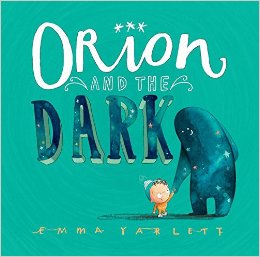 I picked up this little gem on a whim when I saw it on the shelf at the library.  While my child has never had an issue with the dark, I know that many other children do.  ORION AND THE DARK helps children with this phobia in this charming picture book story.

Orion is a boy of many fears--girls, heights, spiders, etc--but his greatest fear is the dark.  He dreads going to bed every night and has trouble sleeping because of his fear of the dark and all that it could possibly bring. One night he finally snaps and tells the dark to go away.  Instead, the Dark becomes an anthropomorphic figure and befriends Orion.  The two new friends explore the night and all of its noises.  Soon, Orion learns not only not to fear the Dark but to embrace it as a friend.

There are some absolutely charming die-cut pages in this book and the illustrations are wonderful.  My one complaint would be that the handwritten text can be difficult to read at times.  I think the story will speak to children of many ages and would be perfect to pair with this classic: 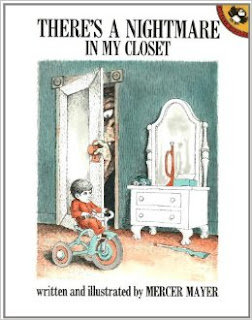 BOTTOM LINE: Highly Recommended. A terrific story for children who may have fear of the dark.  Beautifully illustrated and incredibly sweet.

Posted by Amy M. at 2:27 PM No comments:
Labels: children, Templar
Newer Posts Older Posts Home
Subscribe to: Posts (Atom)
Welcome to Life by Candlelight. This is the home of the "BOTTOM LINE" book review! I've been blogging since 2003 and have worked in public and privates libraries since 2000. Find tidbits about my life, book reviews and other things currently whirling around in my brain. Unless otherwise stated, all books are either library or personal copies. I specialize in contemporary literary fiction with the occasional children's book review.