GOLEM AND THE JINNI by Helene Wecker 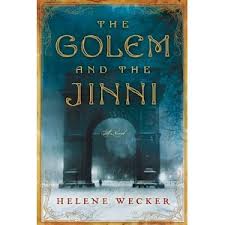 
Two magical creatures roam turn-of-the-century New York City.  Chava is a golem.  She was commissioned by a man looking for a wife who took his request to an Old World rabbi dabbling in dark magic.  When her master dies on the ocean voyage to America, Chava is left on her own to navigate the strange new world.  Ahmad is a jinni.  He was captured many years ago in the Syrian desert and trapped in an old copper flask.  A metalworker in New York City accidentally releases him from his prison and takes him on as an apprentice.  The book moves back and forth between Chava's and Ahmad's stories until they meet by chance and form an unlikely friendship.

I really loved this book.  I thought the story was beautifully written. I loved reading about both characters and their lives.  I loved how each story thread came out of a different tradition, one Yiddish and one Middle Eastern.  Wecker did a marvelous job fleshing out the characters.  Both of them were so compelling and interesting. Both Chava and Ahmad are prisoners in their own way but they find freedom and comfort in each other's company. This is not just a story of two magical creatures and how they can to be, it is also the story of dark magic and its consequences.  There is even a bit of mystery to the book.  For such a chunkster, I read it surprisingly fast.  I had a hard time putting it down.

BOTTOM LINE: Highly recommended.  A beautiful tale of the origins of two magical beings, their lives in New York City and how their friendship changed them both.

I am getting such quality books in the mail! Hard to know where to begin!!!! 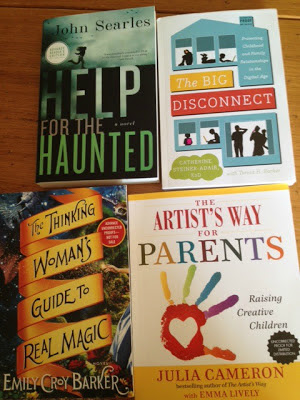 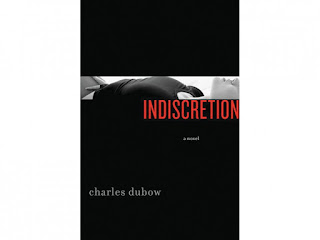 About a year ago, I read THE FORGOTTEN WALTZ by Anne Enright which went on to win many awards. It was billed as a new kind of novel on adultery.  I did not enjoy it and I didn't really feel it had anything new to say on the subject. That is why I was a bit wary when I started to hear similar buzz about INDISCRETION.

Claire is a young, beautiful Manhattanite on the rise.  When a guy she has been casually dating invites her to the Hamptons for the weekend, she jumps at the chance. Even though her relationship with the man fizzles quickly, the weekend away proves life-changing as Claire meets the Winslows that weekend. Harry and Madeleine Winslow are the perfect couple. Harry is an award-winning author and Madeleine is a much-celebrated hostess.  When Claire attends a party at their East Hampton home, she is powerfully drawn to the charismatic couple and is drawn into their orbit.  Claire becomes a fixture at their home. But as Claire's affection and admiration turns into something deeper, the Summer will have far-reaching repercussions for everyone involved.

The story is narrated by Madeleine's longtime friend Walter. Comparisons have been drawn between Walter and Fitzgerald's Nick Carraway and I see the resemblance.  Walter watches the events of that Summer unfold and, eventually, plays his own part in what inevitably follows.  His view of the events is very compelling and offers a more intriguing view of events than if they had been told by one of the main characters.  Ultimately, the story is heartbreaking.  INDISCRETION is a more effective cautionary tale against infidelity than "Fatal Attraction" ever could be.

BOTTOM LINE: Recommended.  An incredibly compelling story about how infidelity can occur and the consequences that it can have. 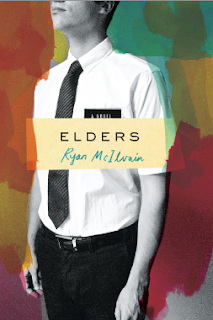 I wasn't sure what to expect when I picked up a copy of ELDERS. I know very little about the Mormon faith and I assumed this novel would be a more tongue-in-cheek look at Mormons on their mission. I was so surprised to discover what a thoughtful and sensitive portrayal of young Mormon men the book provided.

Elder McLeod is nearing the end of his mission in Brazil. During his time there, he has struggled with his faith and his purpose. He isn't sure if he believes in either the faith of his fathers or in his mission. However, he is afraid of disappointing his family back home. His new partner, Elder Passos, is a Brazilian convert who looks at his mission and faith as an opportunity to change his fortunes. He takes his work very seriously and has difficulty with the flippant and sometimes irresponsible nature of his partner. When the two Elders finally find a woman willing to convert, their work with her and her husband brings up issues of their own faith and doubts and challenges their tenuous partnership.

I thought the struggles that these two young men faced were deeply moving. Framing the common struggles of many young people within a Mormon mission in a foreign land only makes it that much more powerful. The book is both sad and thoughtful. I was so surprised by how serious it was and how much it made me think about issues of faith and doubt. I really enjoyed it.

BOTTOM LINE: Recommended.  This is a sad and quiet book about the struggles young people can face when their faith is challenged.
Posted by Amy M. at 9:41 AM No comments:
Labels: Book Review 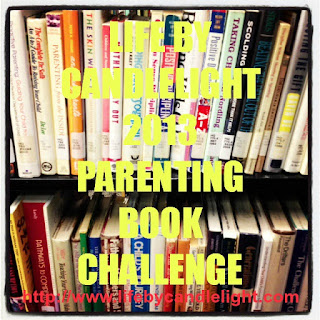 I FINALLY got a copy of SIMPLICITY PARENTING from the library so I am behind.  Are you?  Let's give ourselves a month to catch up.  I am working on picking a title for July but I already have one for August.  It's a new book that comes out on August 13 called THE BIG DISCONNECT: PROTECTING CHILDHOOD AND FAMILY RELATIONSHIPS IN THE DIGITAL AGE.  I can't wait to read it. 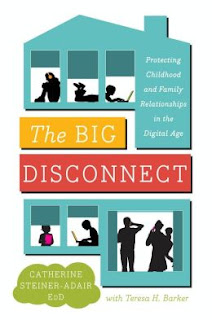 So, let's use June as a catch-up month for now. Check back later for July's title.  I will also work on catching up with all the reviews I am behind on!

Posted by Amy M. at 3:53 PM No comments:
Labels: parenting book challenge 2013
Newer Posts Older Posts Home
Subscribe to: Posts (Atom)
Welcome to Life by Candlelight. This is the home of the "BOTTOM LINE" book review! I've been blogging since 2003 and have worked in public and privates libraries since 2000. Find tidbits about my life, book reviews and other things currently whirling around in my brain. Unless otherwise stated, all books are either library or personal copies. I specialize in contemporary literary fiction with the occasional children's book review.