THE GRACEKEEPERS by Kirsty Logan 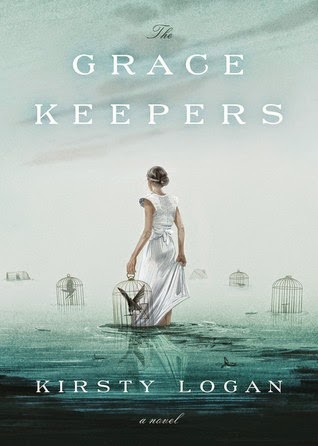 For such a short novel, THE GRACEKEEPERS is incredibly difficult to describe.  When I started reading it, it instantly brought to mind the movie "Waterworld."  However, where "Waterworld" was a failure in its depiction of a world mostly covered in water, THE GRACEKEEPERS is much more successful. THE GRACEKEEPERS takes place in the future where much of the world is now covered in water. Humanity is now broken into two factions--the landlockers who lives exclusively on land and the Damplings who live exclusively on water.  The two groups are even separated in death.  When damplings die, their loved ones must bring them to a gracekeeper for burial. Gracekeepers live solitary lives in the middle of nowhere and survive primarily on the payment given to them for conducting burials. The deceased are wrapped in a shroud and submerged in the waters surrounding the Gracekeeper's cottage.  The Gracekeeper then suspends a birdcage over the body.  The cage holds a special kind of bird called a grace. Graces serve as physical reminders of the length of a period of mourning. The graces are not fed and, when they die, the mourning period is finished.  Callanish is a Gracekeeper and her solitary life helps her to protect a secret. Elsewhere, we meet North who is a circus performer.  This circus on the water travels from island to island entertaining the "clams" in exchange for food and other goods.  North's performance is special because she does an act with a bear. In a world with very little land, bears are unusual. Eventually, the paths of Callanish and North will cross and their lives will never be the same.

Logan has created a really beautiful novel.  The characters are fascinating and Logan manages to convey a lot of story in such a short book.  My only gripe is that I was left with so many questions!  I would have loved for Logan to spend more time introducing us to this world. There was so much more story to tell!  While the story that Logan gives us is ultimately fairly predictable, the beautiful language and imagery distracts the reader from the tale's ultimate conclusion.  Logan does a wonderful job of giving readers a very clear idea of what this world looks like. I only wish there had been more.

BOTTOM LINE: Recommended. A lovely tale of love and loss set in a watery futuristic landscape.

Posted by Amy M. at 11:46 AM No comments:
Labels: Book Review, Crown
Newer Posts Older Posts Home
Subscribe to: Posts (Atom)
Welcome to Life by Candlelight. This is the home of the "BOTTOM LINE" book review! I've been blogging since 2003 and have worked in public and privates libraries since 2000. Find tidbits about my life, book reviews and other things currently whirling around in my brain. Unless otherwise stated, all books are either library or personal copies. I specialize in contemporary literary fiction with the occasional children's book review.