BRING HER HOME by David Bell 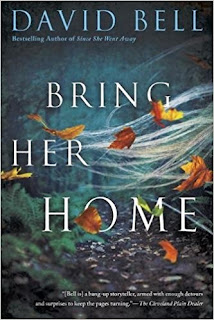 (I received an advance copy of this book from the publisher)

In David Bell's latest novel of suspense, a frantic father tries to discover what happened to his missing teenage daughter. Bill Price's 15-year-old daughter Summer went missing along with her best friend. The two girls are found in a city park. One is dead and one is barely holding on after a severe beating.  As Bill struggles to understand what happened to his daughter and her friend, secrets begin to come out that reveal he may not have known his daughter as well as he thought.

Bell is a classic suspense writer. He know how to keep his readers on the edge of their seat. Most chapters end with a cliffhanger that will make you want to keep on going. The novel is also filled with enough twists and turns to keep you guessing throughout the book. It was a very fast read for me because I had to know what happened. I also enjoyed how Bell explores parenting teenagers and how difficult it can be to know what is really going on in their lives.

I was disappointed with the title. The author sets you up to believe that Summer is dead for a good portion of the book. I keep wondering why the title was BRING HER HOME if Summer is dead. The reader finds out she may not be which explains the title. Seemed like a bit of spoiler to me and ruined some of the twists and turns.
**END OF SPOILER**

BOTTOM LINE: Recommended vacation read.  This fast-paced book will keep you engrossed until the end. While I was a little let down by the ending, I enjoyed the read overall. I think parents especially will find this book riveting.
Posted by Amy M. at 10:03 AM No comments:
Labels: Book Review, Viking/Penguin
Newer Posts Older Posts Home
Subscribe to: Posts (Atom)
Welcome to Life by Candlelight. This is the home of the "BOTTOM LINE" book review! I've been blogging since 2003 and have worked in public and privates libraries since 2000. Find tidbits about my life, book reviews and other things currently whirling around in my brain. Unless otherwise stated, all books are either library or personal copies. I specialize in contemporary literary fiction with the occasional children's book review.