ANNA AND THE SWALLOW MAN by Gavriel Savit 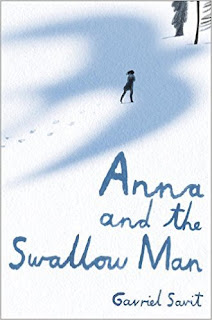 (I received an advance copy of this book from the publisher.)

In 1939 Kraków, 7-year-old Anna Łania lives with her linguist professor father. Anna's father teaches her many different languages and encourages her to befriend all kinds of people in order to practice her linguistic abilities. One day, Anna's father leaves for a meeting at the local university and never returns. None of Anna and her father's friends take her in and she must fend for herself. One day, Anna meets a very unusual man who seems to be able to talk to birds. This mysterious man allows Anna to accompany him. The two become wanderers and skilled in the art of deception. The mysterious man does not allow Anna to use her name and never gives her his own so the two become known by the psedonyms of "Sweetie" and "Swallow Man."  As the two travel through Poland and beyond, they encounter a variety of individuals--some friendly and some not. As their years together pass, readers get a glimpse into turbulent WWII Poland and the atrocities of war through the eyes of Anna and the Swallow Man.

While this book has been suggested for the Young Adult reader, I think it is most appropriate for high school age students and beyond. There is some very difficult content within the book. The story is beautifully lyrical and the characters are complex and interesting. However, the narrative may be difficult for some to understand. Much has to be inferred rather than explicitly spelled out. Readers may draw different conclusions about both the motives of the characters and who they really are. Even the ending is ambiguous. The story offers a different look at WWII Poland as told through the eyes of people living on the fringe rather than directly on the war front.  I think this book could offer some great discussion for book club groups as readers puzzle out the meaning of different moments within the story.

BOTTOM LINE: Recommended. A lovely and often heartbreaking look at the hard lessons of war. Readers who like very clear cut motives and endings may struggle with this one. There are no definitive explanations of character motives or even of what happens at the end.  Much like war itself.

ANNA AND THE SWALLOW MAN will be published on January 26, 2016.
Posted by Amy M. at 8:00 AM No comments:
Labels: Book Review, Knopf
Newer Posts Older Posts Home
Subscribe to: Posts (Atom)
Welcome to Life by Candlelight. This is the home of the "BOTTOM LINE" book review! I've been blogging since 2003 and have worked in public and privates libraries since 2000. Find tidbits about my life, book reviews and other things currently whirling around in my brain. Unless otherwise stated, all books are either library or personal copies. I specialize in contemporary literary fiction with the occasional children's book review.