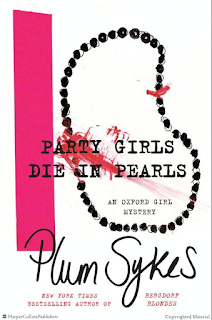 I went through a period in my twenties where I loved reading fiction about wealthy New Yorkers and other celebutantes and their white collar problems. At the time, a whole slew of writers was releasing books like these including Lauren Weisberger and Emma McLaughlin and Candace Bushnell. And, of course, Plum Sykes. It has been a few years since Sykes' last novel so I was excited to see this one come out. But, instead of New York, I was surprised to find that Sykes' latest book takes place in Oxford in the 1980s. And it's a mystery!

Ursula Flowerbutton arrives at Oxford in 1985 with dreams of learning in hallowed halls and writing for the prestigious Cherwell newspaper.  Upon her arrival, she meets wealthy American Nancy Feingold who not only becomes a fast friend but also provides Ursula entreé into elite Oxford society. The fun is cut short when Ursula discovers a wealthy classmate murdered in a don's room. Determined to solve the mystery and prove herself worthy to be a journalist at Cherwell, Ursula begins her investigation and starts uncovering all sorts of sordid secrets within the walls of Oxford.

The best part of PARTY GIRLS DIE IN PEARLS were all the wonderful details that Sykes includes about Oxford life. Sykes attended Oxford and fills her book with all sorts of insider information and footnotes to explain cultural phenomena that may not be familiar to younger readers. I felt as if I were reading "Less Than Zero" in an Oxford setting. (and more humor!)  The mystery itself is fairly pedestrian. Sykes leaves enough clues that it is fairly easy to figure out where the mystery is heading. The most fun lies in the inside glimpse into life at Oxford and its students during the 1980s.  The book is a very fast and enjoyable read. Perfect for your next vacation.

BOTTOM LINE: Recommended. PARTY GIRLS DIE IN PEARLS is an enjoyable vacation read that is hard to put down.

Posted by Amy M. at 1:16 PM No comments:
Labels: Book Review, Harper
Newer Posts Older Posts Home
Subscribe to: Posts (Atom)
Welcome to Life by Candlelight. This is the home of the "BOTTOM LINE" book review! I've been blogging since 2003 and have worked in public and privates libraries since 2000. Find tidbits about my life, book reviews and other things currently whirling around in my brain. Unless otherwise stated, all books are either library or personal copies. I specialize in contemporary literary fiction with the occasional children's book review.