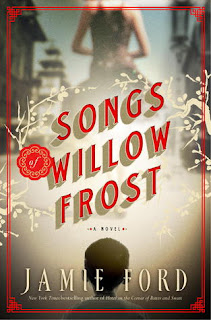 I really enjoyed Jamie Ford's last book, HOTEL ON THE CORNER OF BITTER AND SWEET. I thought it was a very sweet story and reminded me of a fairly shameful period in American history.  I was interested to see how he would follow up on the success of that novel.  I was very pleasantly surprised after reading his latest work, SONGS OF WILLOW FROST.

12-yr-old William Eng is living in an orphanage in 1930's Seattle.  He is the only Chinese boy at the orphanage and he has waited for his mother to come back and claim him after seven years.  It is the Depression and many of the children in the orphanage have parents who cannot take of them and abandoned them to the system.  William's last memory of his mother is finding her unsconcious in a bathtub and watching as she is taken away to the hospital. He hasn't seen her since.  On his birthday, William sees a movie starring a woman named Willow Frost that he is convinced is his mother.  Spurred on by his blind friend Charlotte, William decides to try and find his mother and learn the truth about his abandonment once and for all.

I really loved this book.  I though Ford had interesting things to say not only about that particular time period in history and the evolution of movies but also gives us insight into the world of the Chinese population living in Seattle at that time with the complexity of customs and social mores.  I also loved the focus on the relationship between mothers and sons.  The story is both sad and beautiful and I found it quite moving.

BOTTOM LINE: Recommended.  A very sweet tale of one boy's courage in trying to find the truth about his past and that of his mother. 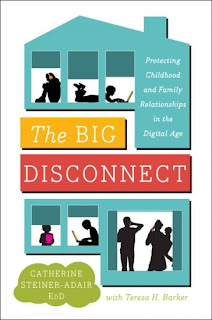 Although I am not anti-technology, I would like to see a lot less of it in our lives. I believe that computers at school belong in a lab and not in a classroom. At this time, our 5-yr-old son does not use a computer or tablet and only gets to use educational apps on my smartphone on very rare occasions.  I care much more about him engaging with the world and in creative play.  Technology is fairly intuitive and I'm not worried about him being "left behind."  This book is brand new and I have really been looking forward to reading it.  I hope it offers lots of topics for discussion.

I am starting a new adventure today as a Barefoot Books Ambassador.  Many of you know that I am passionate about books.  I have worked in libraries for over 12 years and I love sharing my passion for reading with children. When my son was 2, his godmother gave him a Barefoot Books book. 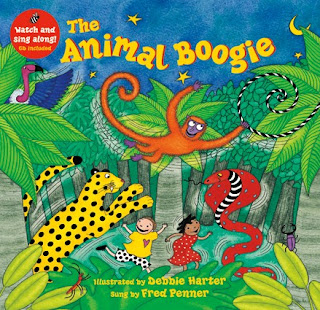 He made me read it over and over and he insisted that I SING the entire book.  I was so grateful that it came with a CD for those times when my voice wouldn't cooperate.  Since we got ANIMAL BOOGIE, we have been adding to our collection.  I love the colorful books, the multicultural emphasis and the high quality of the products.  As I was browsing the online store recently, I saw that they offered opportunities to sell these wonderful books. I have been looking for additional ways to earn money and loved the idea of combining extra work with my passion for books and literacy. So, I am going to try my hand at being a Barefoot Book Ambassador.

I hope you will take a moment to browse all the wonderful products that are available.  Even if you don't live nearby, I can be your Ambassador and I'm happy to answer any questions about the products.  I hope you will enjoy Barefoot Books as much as I do!!!  I will periodically do a special book review on a Barefoot Books title to keep you up to date on the lastest that the company has to offer.

Posted by Amy M. at 9:03 AM No comments:
Labels: barefoot books ambassador
Newer Posts Older Posts Home
Subscribe to: Posts (Atom)
Welcome to Life by Candlelight. This is the home of the "BOTTOM LINE" book review! I've been blogging since 2003 and have worked in public and privates libraries since 2000. Find tidbits about my life, book reviews and other things currently whirling around in my brain. Unless otherwise stated, all books are either library or personal copies. I specialize in contemporary literary fiction with the occasional children's book review.