LUCKY US by Amy Bloom 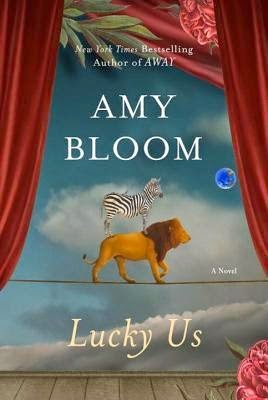 
When Eva turns 12, her mother unceremoniously dumps her at her father's house. Eva has understood for years that she and her mother are her father's second family.  When her father's wife dies, Eva's mother takes the opportunity to start a new life.  Eva moves into her father's home and meets her older half-sister Iris for the first time. Iris has big dreams of becoming a star and escapes to Hollywood as soon as she can with her little sister in tow. The family's fortunes ebb and flow over the 1940s as the girls are eventually reunited with their deadbeat father and attempt to make a life for themselves as a family.  Each of them is a flawed individual so consumed by their own dreams that they can't seem to come together as a family. The book is mostly told from Eva's perspective and follows the family throughout the 1930s and 1940s.

Although I think Bloom has some interesting things to say about success,failure, redemption, and family, I had a hard time connecting with the characters. Although they were all plucky and worked hard to achieve their individual dreams, they were not particularly likeable.  While some describe the book as humorous, I did not find that to be true at all.  I thought it was pretty heart-breaking. It made me sad to see how selfish the individual family members were and how often Eva bore the brunt of that selfishness. The book was interesting and well-written but not particularly enjoyable.

BOTTOM LINE: Recommended for some readers. Bloom fans will find much to like here. Her characters and settings are definitely vivid and interesting.  The people just aren't particularly likeable.
Posted by Amy M. at 3:20 PM 1 comment:
Labels: Book Review

THE BOOK OF LIFE by Deborah Harkness 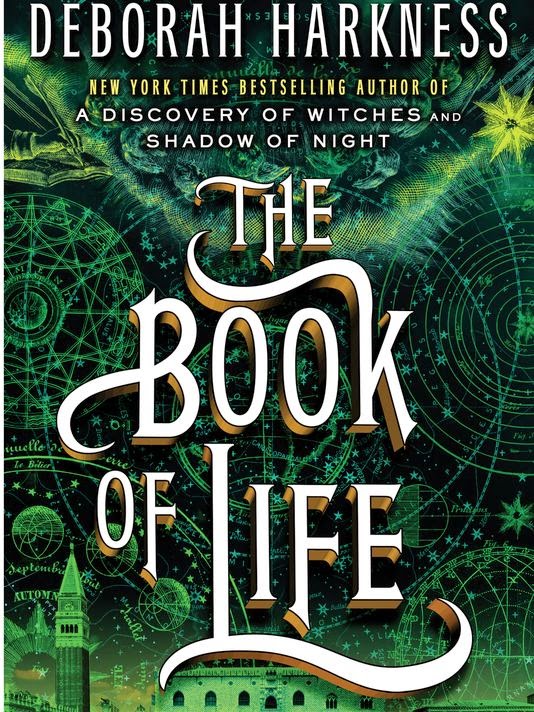 **NOTE:  Although I try to be VERY careful about spoilers, I have to allude to previous books in the trilogy for this review. There may be general spoilers and allusions to events
in the first two books.**

It has been a long wait for the final book in the ALL SOULS TRILOGY but it is almost here!  Although I have never been a big fan of books about witches and/or vampires, something about this particular trilogy pulled me in from the very beginning. I always recommend these books to fans of Diana Gabaldon. The first book, DISCOVERY OF WITCHES, introduced us to scholar Diana Bishop who accidentally calls up a mysterious book at the Bodleian Library that turns out to be a book coveted by witches, daemons, and vampires alike. Diana has never manifested any powers even though she comes from a long line of witches.  Her quiet life as a scholar is compromised when she discovers Ashmole 782 and attracts the attention of other creatures including the mysterious vampire Matthew Clairmont.  The two become embroiled in the conflict surrounding the mysterious manuscript while engaging in their own forbidden romance.  In SHADOW OF NIGHT, we continued to follow Diana and Matthew's relationship as they journey to Elizabethan England to hide from the creatures seeking to exploit Ashmole 782 while giving Diana time and help in learning to cultivate and understand her powers.  Two years later, it is time to finish Diana and Matthew's story in BOOK OF LIFE.

The BOOK OF LIFE picks up where SHADOW OF NIGHT left off with the return of Diana and Matthew to the present.  Diana has greatly developed her powers during her time in the past but is keeping quiet about her new talents. Diana and Matthew try to settle into their life together after all the changes they experienced in the past including the fact that Diana is now officially a member of the de Clermont family thanks to Philippe.  Diana must figure out her new position, her new powers, and creature politics while keeping the secret about a very specific change in her that occurred in her that she brought from the past. All of the characters are back as the de Clermont family readies themselves to take on the creatures looking for the Book of Life as well as fighting the Congregation.  Diana and Matthew must hurry to find the missing pages of the Book of Life before their enemies do.  In the meantime, they face a new threat in the form of one of Matthew's vampire children who threatens to destroy everything.

I thought Harkness did a great job in tying up loose ends and finishing the trilogy. I felt perfectly satisfied when I finished the book although I was disappointed that one character didn't get a clear ending.  I would love to see Harkness choose some of the characters from these books (Nathaniel/Sophie/Margaret or Gallowglass, for example) and give them their own book or books. I hate to leave the characters behind. Harkness has created such a fascinating world.  I find it amusing that she omits a lot of the less attractive aspects of vampires such as only being able to come out at night, never being able to consume anything but blood, etc.  It certainly makes them more attractive! With her intricate descriptions of vampire politics and bloodlines, it is clear that she has thought a great deal about the intricacies of this world that she created.  It is really fascinating!

I have heard people describe Harkness' books as "bodice rippers" and I would have to disagree. Although the books contain a good deal of romance and sex, the sex scenes are modest and do not go into intimate detail.  In my experience, "bodice rippers" tend to be of "Romance" genre and include some pretty specific and graphic descriptions of sex that tend to involve heaving bosoms and the ripping of clothing. These books do not.  What you WILL find is romance, mystery, time travel, action/adventure, history and much more.  The books are wonderfully entertaining and make for terrific vacation reads.

BOTTOM LINE: Highly recommended!  If you are looking for a highly entertaining vacation read, these books are for you!  BOOK OF LIFE comes in at over 570 pages and I finished it in two days. I couldn't put it down!  Very fun books!

I hope they consider making movies or a television series out of these books. I already have a cast in mind:

My Picks for an All Souls Trilogy Cast

TOMORROW AND TOMORROW by Thomas Sweterlitsch


I received an advance copy of this book from the publisher.

I feels as if I have been reading a lot of dystopian/futuristic novels lately. I may have reached a saturation point.  One thing I love about these types of books is the fact that I can see so many of them easily translating to the big screen. When I read TOMORROW AND TOMORROW, I couldn't help but envision Joseph Gordon Levitt as John Blaxton.

In the near future, everyone has Adware hardwired into their brains. This hardware also contains special lenses that go inside your eyeballs to not only project images in front of you everywhere you go such as commercial ads but also to record what you are viewing. The city of Pittsburgh has been destroyed by a terrorist attack but an Archive of the pre-apocalypse city has been preserved by creating a virtual city through the collected visual recordings of its inhabitants. John Blaxton lost his wife and unborn child when Pittsburgh was destroyed. He spends most of his free time in the Archive reliving his time with his wife. It has become an addiction for him. Blaxton works as a claims investigator who works within the Archive to verify insurance claims made on those who perished in the blast.  While in the Archive, Blaxton finds an unreported murder. He becomes fixated on finding the truth about this woman and it brings him into a greater mystery where his very life may be in danger.

This book is so hard to describe!!!  The world that Sweterlitsch has created is a bit complicated and it took a little while to catch on to what he was describing.  As someone who is a bit ad-phobic, the idea of the Adware was horrifying to me.  This neural network is embedded in your brain and makes ads pop up in front of your eyes everywhere you go.  The software component reads your mind and knows exactly how to customize ads to your preferences. For example, if you are a man who loves curvy blondes, the Adware would superimpose a live action image of a curvy blonde modeling lingerie if you looked over at a Victoria's Secret store. And, of course, this Adware is subject to hacking and tracking. The mystery is compelling and I loved the characters.  The book had the feel of "Blade Runner" in terms of style.  I could absolutely see this book being made into a movie.

BOTTOM LINE:  Recommended. A really creative and interesting mystery. I thought Sweterlitsch had a very compelling vision of the future. And it was scary!
Posted by Amy M. at 3:17 PM No comments:
Labels: Book Review

It wasn't enough for me to work in libraries full-time. There just weren't enough books in my life. So, I started selling Barefoot Books on the side almost a year ago.  I kept buying them for my son and decided that I loved them enough to introduce them to others.  If you'd like to try some of those wonderful, multicultural children's books, I have a discount code for you!

I am always happy to give recommendations as well!


Posted by Amy M. at 11:02 AM No comments:
Newer Posts Older Posts Home
Subscribe to: Posts (Atom)
Welcome to Life by Candlelight. This is the home of the "BOTTOM LINE" book review! I've been blogging since 2003 and have worked in public and privates libraries since 2000. Find tidbits about my life, book reviews and other things currently whirling around in my brain. Unless otherwise stated, all books are either library or personal copies. I specialize in contemporary literary fiction with the occasional children's book review.