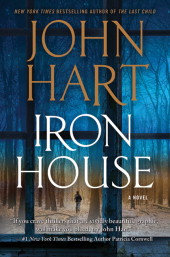 At first glance, IRON HOUSE looked like the type of run-of-the-mill thriller that I tend to stay away from.  I expected it to be filled with a lot of action and very little else. I was pleasantly surprised.
Michael has been a member of an organized crime group since he was a teenager and he is ready to get out.  He has finally found some peace with a woman named Elena who is carrying his child and he wants to shield them both from the world he is a part of.  Quitting the mob life is easier said than done and it doesn't appear that his former co-workers will let him go without a fight.  When Michael and Elena are forced to flee, they head to the place Michael was born.  The place where he was separated from his brother many years ago. As family secrets are dredged up and the mobsters are closing in, Michael must face truths what really happened at the Iron Mountain Home for Boys and the reality of how he and his brother ended up there.
At first glance, this book appears to be an organized crime suspense novel. It definitely has plenty of action and violence. However, the heart of the novel lies in the relationships within the story.  There is a great deal of familial conflict and drama that prove to be the most interesting parts of the book. I was happy to see Hart develop the "family secrets" side of the story.  Long-time readers know that hidden family secrets are always a favorite of mine. The story is complex and interesting and deal with many different themes such as mother/son relationships, sibling relationships, the reinvention of self and the burden of hidden truth. All the elements work together really well to make a story that has something for almost everyone.
BOTTOM LINE:  Highly recommended. A real surprise for me.  I enjoyed this book a great deal.  I thought the story was interesting and complex and different from your average thriller.  A good vacation read.
Posted by Amy M. at 4:11 PM
Labels: Book Review