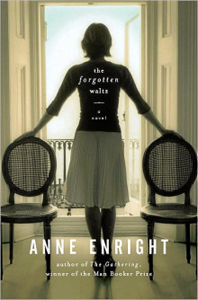 Every so often, a book comes along that garners a great deal of critical and popular praise that simply falls flat for me. It happened last year with A VISIT FROM THE GOON SQUAD. I found that book entirely too gimmicky but I was definitely in the minority.  This year, it appears that THE FORGOTTEN WALTZ will be the book that I must disagree with popular sentiment about.

In a small suburb of Dublin, Gina Moynihan recalls how her affair with the love of her life, Sean Vallely began.  She recalls when she first met Sean and how their affair began and the various entanglements and issues that arose as a result of that affair.  Namely, the effect it had on Sean's daughter Evie.

While the book offers an interesting account of how affairs begin and the effect that can have on the people around them, I found the book to be incredibly slow and boring.  At 263 pages, it isn't even very long but it took me months to read because I just couldn't engage with it.  The characters are not only unsympathetic but also uninteresting. The story jumps around in time in a very confusing way and made it difficult to follow the narrator's line of thought.  The book also ends fairly abruptly.

BOTTOM LINE: Not recommended.  I think Enright has interesting things to say about love and adultery but the book is too meandering and quiet for my taste.  I found the whole thing to be quite slow and boring.
Posted by Amy M. at 11:51 AM
Labels: Book Review

You won't believe this Pottery Warehouse Glendale AZ said...
This comment has been removed by a blog administrator.
5:24 PM