THE SILENT WIFE by A.S.A. Harrison 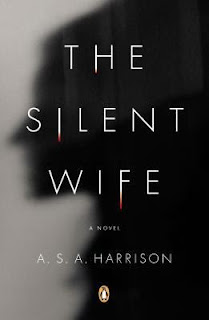 A lot of reviewers are drawing comparisons between THE SILENT WIFE and GONE GIRL.  While the structure of the book is similar, I was reminded more of THE KINGDOM OF CHILDHOOD by Rebecca Coleman.  Within the first two pages, the reader is introduced to psychotherapist Jodi Brett and knows that she has done something very wrong.  Jodi and her partner, Todd Gilbert, have been together for twenty years.  Jodi has created a perfect life for them and acts as a wife in every way but in an official capacity. She has never wanted to get married. She is the most patient and forgiving of women even though Todd is a prolific philanderer. THE SILENT WIFE chronicles the disintegration of their marriage and is told from both Jodi's and Todd's points of view.

I didn't find Todd to be a particularly interesting character.  He seems like your run-of-the-mill charismatic cheater. Jodi, however, is fascinating.  She is clearly an intelligent, beautiful, and capable woman. As a psychotherapist, she should have a pretty good sense of self and understanding of what drives human beings.  But her perfection makes her seem more of a cartoon character than a real person. This point of view changes, however, as the book progresses. The reader gets to know Jodi much better and sees what makes her tick. As their "marriage" falls apart in an irreperable way, we see the true Jodi start to come out.

This book was a very quick read because I had to know what was going to happen and why. The ending felt a little anti-climactic to me but I absolutely loved Jodi's character. She is really fascinating.  Harrison does a great job in slowly revealing Jodi's true self.  The sections of the book with Todd were boring in comparison. While the book is suspenseful in many ways, I wouldn't classify it as a "suspense" novel. It is much more a fascinating look at a relationship built on lies that has finally fallen apart and the consequences that come of that dissolution.

BOTTOM LINE: Recommended.  A really interesting and quick read that follows the disintegration of a marriage and its horrific fallout.