A VISIT FROM THE GOON SQUAD by Jennifer Egan 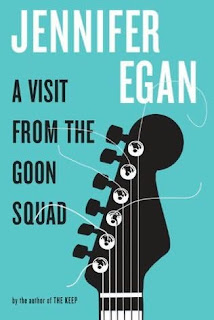 I received an advance copy of this book from the publisher.
A VISIT FROM THE GOON SQUAD follows the lives of several people connected by their association with record executive Bennie Salazar. The book is structured like a record with an A and B side.  Each part of the story is its own "song" that follows one of the characters.  The story begins with Sasha, Bennie's assistant, who struggles with kleptomania as she attempts to sort out her life. Sasha's story provides the lead-in to Bennie's introduction. After Bennie's intro, we are taken back in time to where Bennie got his start as a teenager and the story is told through the point of view of one of his friends.  The story meanders back and forth through time with each chapter focusing on another interconnected character. The story ranges from the 1970s through the present following the lives of these people are they attempt to deal with the effects of the ultimate goon----time.  It reveals how our destinies can be shaped by our interactions with others and how the most insignificant events can have profound effects on our lives.
While this book is clever and ambitious in its set-up, I'm not sure it worked for me. I liked the idea of the interconnectedness of all of the characters but moving back and forth among the characters AND moving bakc and forth through time was sometimes jarring. I spent the first few pages of every chapter just trying to get my bearings. The book moves so quickly it is difficult to become emotionally invested in any of the characters. I did really enjoy the final section. Egan shows us the not-too-distant future where our reliance on technology and social media has made it difficult for us to connect in any real or personal way. To me, this was the most compelling part of the book.
BOTTOM LINE:  Not recommended.  This book was just missing something for me. The characters are interesting and the set-up is clever but the structure was too jarring for me and I was never really able to get into the story.
Posted by Amy M. at 11:35 AM
Labels: Book Review