WHEN WILL THERE BE GOOD NEWS by Kate Atkinson 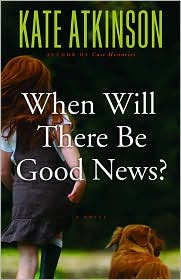 I don't normally read a lot of crime fiction. However, I thought Atkinson's CASE HISTORIES was well done and thought I'd pick up her latest offering, WHEN WILL THERE BE GOOD NEWS. The story focuses on a woman, Joanna Hunter, who survived a vicious attack when she was six years old and has now gone missing thirty years later. Atkinson's character Jackson Brodie makes a return appearance in the book. Virtually every character is a survivor of some sort. The theme of survival is big one throughout the story. How do we move on from great tragedy and adversity? What kind of people do things like that shape us into? Do we have a choice about the people that we become?

Atkinson hits you with violence right from the beginning and I had a lot of difficulty with it. I think it was because the majority of the violence throughout the book was directed at women and children. I appreciate the fact that Atkinson crafts such strong female characters, however. They are not just victims. They are empowered and fight to the bitter end.

Ultimately, the book made me sad. Not because it isn't good but because the subject matter left me melancholy. I think the real message of the book can be summed up in this quotation from one of the characters:

That is a great quote. Have you read the second book in the series? I really liked Case Histories, but I haven't had a chance to read the other books featuring Brodie.

I agree with LF re the quote. Now that is something to remember in our day-to-day lives.