THE POACHER'S SON by Paul Doiron 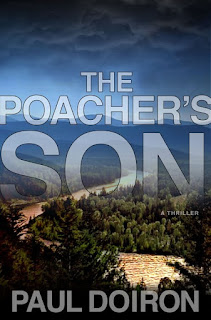 I received an advance copy of this book through the Barnes and Noble First Look program.

I have been putting off my review of this book because it was such a disappointment.  I have had the privilege of participating in the Barnes and Noble First Look program many times and I have really enjoyed every single selection. When they announced that the next selection would be a mystery/suspense title, I couldn't be more excited.  THE POACHER'S SON is set in Maine and follows Mike Bowditch, a game warden who just received news that his absentee father, a "ne'er do well" poacher, is the main suspect in the shooting of a timber executive and a cop.  Bowditch has had a long love/hate relationship with his father and is conflicted about how to react. He is dedicated to his job but cannot stop himself from wanting to help his father.  The book follows Mike's attempt to locate his fugitive father before the authorities do while he tries to discover who really committed the murders.

This is a classic father/son conflict story that reveals how such relationships can be extremely complex and difficult. The setting is wonderful and Mike's position as a game warden offers a new and interesting twist on this genre. I loved the descriptions of Mike's job and the different people and animals he ran into as part of his work.  Mike's relationship with his father was compelling at first but lost momentum somehow.  It is confusing how a book that starts off in such a solid way seemed to lose its way and flounder. The story and setting are solid but the characters become more and more unbelieveable and unnecessarily complex.  The ending just felt ridiculous and rushed. Perhaps if Doiron had stretched the story out and taken a little more time with it, it could have been great.  As it is, a promising beginning was ruined by a hurried slapdash end.

BOTTOM LINE:  Not recommended. A weak mystery that wasn't especially suspenseful. It would have worked better as a simple look into a troubled father/son relationship.
Posted by Amy M. at 9:04 AM
Labels: Book Review